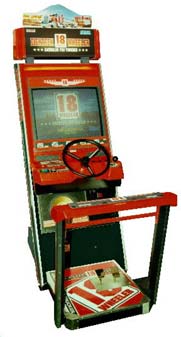 Description:
18 Wheeler: American Pro Trucker, is a raucous and fun-filled take on truck driving. You pick from four initially selectable rigs, each with its own ratings in speed, torque, and durability. Then you take to the open road to deliver your cargo from one city to the next. Don’t be discouraged by routes like « New York to Key West » though you won’t be driving 20-hour races. In typical arcade-racing fashion, you begin a course with a short time limit and have to hit checkpoints to extend your time. Highway traffic and a rival trucker will make your life more difficult, and if you can’t make your destination in time, or you trash your cargo, it’s game over. You can earn extra money by hauling heavier loads and avoiding obstacles, but since money can’t actually be used to buy new parts, it only serves as the equivalent of a score. Finally, if you get to the goal before your rival, you’ll get a shot at a bonus stage that lets you upgrade your horn, muffler, or engine for added performance.

18 Wheeler is pretty difficult at first: To really perform well, you’ll have to master the slipstream technique, where you get a speed boost by drafting behind another truck for decreased wind resistance. Shortcuts are also available for faster times and varied scenery. All this is entertaining, until you reach San Francisco in the fourth level and realize that the game is over. Yes, the inclusion of only four courses in the arcade mode really hinders the replay value. After you’ve figured out the best routes on each track and when to avoid which obstacle, there’s not a lot of incentive to play through the game repeatedly 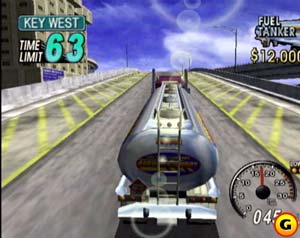 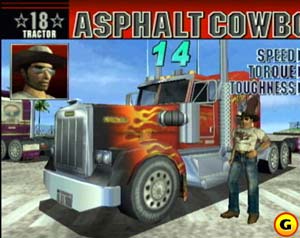