The story of the game is typical. A bunch of rich guys and Bison have sponsored a tournament (isn’t that original?) The rich guys wanna make money, and Bison wants to drain power from the fighters to enhance his « psycho » power. Depending on who you choose, you’ll wind up fighting either Geese or Bison.

One of the main differences of most Capcom games is the inclusion of SNK characters. While these characters have never been in a SF game before, they are not « new » characters, per se, and have been tuned down. Several of them are missing moves that made them far more competitive fighters. Case in point: Geese has none of his offensive attacks other than the ground waves. Geese is supposed to be a bad-ass, take-no-prisoners head basher, but in Capcom Vs SNK he’s sort of a cupcake.

Another « major » difference is the implementation of the ‘groove’ system. With this system, you choose between the Capcom or the SNK groove, the only difference being how you power up your super bar. If you pick the Capcom groove, your power bar works exactly like it did in Street Fighter Alpha 3. There are three levels of power which get charged up as you attack. If you pick the SNK groove, you charge your super bar by holding down the fierce punch and roundhouse kick buttons at the same time. Your bar fills up rapidly, but leaves you vulnerable to attack. When your bar is at the max level in the SNK groove, your regular attacks become stronger. Big deal.

The graphics are pretty solid. Good animation and cool lighting effects on all the projectile and flame-type attacks are a nice addition. The backgrounds are well done and the stages even have cutesy intros. Some of the characters are really well drawn, while some look horrible. The sound, on the other hand is pretty good. 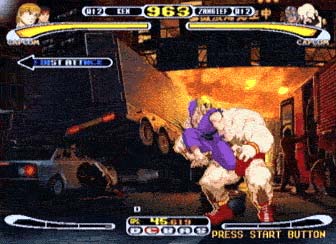 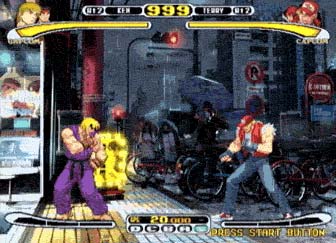