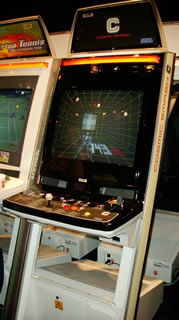 In Cosmic Smash, you control a racket-wielding character rendered in an impressive semitransparent cel-shaded technique. The object is to break blocks at the far end of the room you’re in before time runs out, using the racket to blast a red ball toward the blocks. Sounds simple enough, right? Well, the blocks move. There are unbreakable blocks you must avoid (or use to your advantage). You can send your ball careening off the floor, ceiling, or walls, using the analog stick to direct your shots much like Virtua Tennis (it controls just as well). There is a jump button, and a normal smash button, as well as a trick smash button – pressing this makes your character glow with a golden aura, and you can perform a variety of trick smashes. These trick smashes are more powerful than the regular shot, but eat up your time faster. Use a trick smash along with the jump button – you can even jump off the walls and do somersaults and other tricks – and you’re in for some fantastic visuals. If you can manage to finish a stage via a trick smash, you’re awarded extra points, and are treated to various replay angles. You’re rated after each stage (there are around 50, with branching paths), and awarded points based on remaining time and lost balls.

Cosmic Smash is a welcome throwback to old-school gaming, updated with 3D graphics and delightful visual details you might not notice at first. The atmosphere is surreal, almost relaxing, and the moody techno-ish soundtrack fits it perfectly. It’s sparse on modes and extras, but the gameplay is so addicting and fun it doesn’t matter.. Add the fact that you can post your top scores to the game’s website (cosmicsmash.com) via a password, along with the branching paths, and you have a game with a lot of replay value.