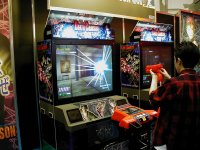 Death Crimson OX is a House of the Dead clone. It shamelessly resembles Sega’s classic shooter series in nearly every way you can think of. The once-picturesque town ravaged by a horde of monsters, the kidnapped female, the sort-of-hard rockin’ soundtrack-it’s all here. The problem is, it’s not nearly as good. True, House of the Dead had camp value thanks to shoddy voice acting and a goofy storyline, but Death Crimson OX is so cheesy it can’t be taken seriously. The game focuses on the SMO organization and its leader, Admiral Zaza, who has kidnapped a freedom fighter named Lily. Her daughter Yuri and troubled friend Kou set out with the bafflingly ancient and mythical pistol Crimson to kill lots of monsters and eventually stop SMO.

Anyone who’s played a light-gun game in the last five years will know exactly what to expect from Death Crimson OX. One or two players blast their way through a linear progression of levels, wasting enemies with abandon, sparing civilians who get in the way, and nabbing the occasional power-up item. Of course, defeating the big bad monster with the requisite weak point at the end of a level takes you through a short story sequence and on to the next kill-fest 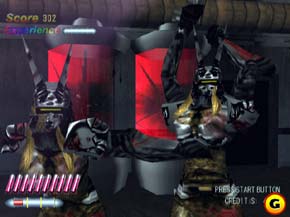 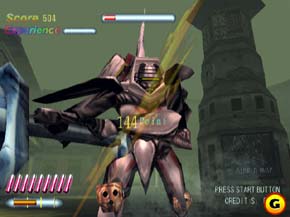