F1 World Grand Prix focuses on the 1998 FIA Formula One Championship season. In the championship, single race, time-attack and versus modes, you can join one of 11 teams, such as McLaren, Ferrari, and Sauber. Within each team, there are two drivers to choose from, such as Jean Alesi and Michael Schumacher, and there are 22 drivers in all. The game also boasts 16 real-world racing circuits, such as Albert Park in Australia and Germany’s Hockenheim. Once you’ve decided how to tackle the game, you can choose a variety of racing options. Simulation buffs can adjust weather, car damage, and nine categories of car modification for best results. As far as F1 games go, F1 World Grand Prix exhibits nearly unmatched physics and gameplay. Cars really do handle differently on grass and asphalt than they do on pavement. Skilled braking is required, and riding the wall is not a tactic that will win the race 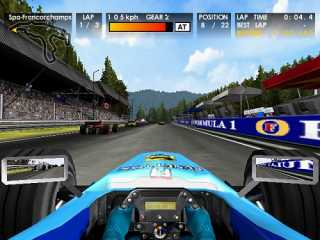 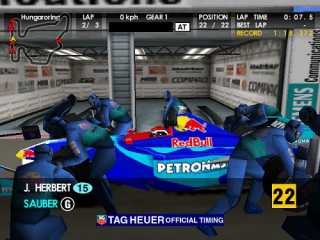