Idol Janshi Wo Tsukucchaou, also known as Suchie-Pai 3, was the
first Suchie-Pai game on the Dreamcast. However, Sega Japan has put a ban
on any sequel to « adult » games that appeared on the Saturn. While
Suchie-Pai wasn’t a true « adult » game, it did show some nudity. To work
around this, Jaleco made a number of changes to the game so it wouldn’t be
as closely associated to the earlier Suchie Pai games. Unfortunately, the
game suffered as a result. Most of the characters from the previous games
were gone. Only Kyoko, Yuki, Mai, and Milky Pai remain. There is no nudity
or stripping. In addition, the load time is quite noticeable. However, the
game does play similiar to the previous Suchie-Pai games. After winning a
hand, you get to try your hand with a matching game where you can get
power-ups or uncover all to beat your opponent. There is also a second
mode called « Omake Mode ». It becomes accessible after winning a few
opponents. In this mode, you get to « dress » your partner with outfits from
the characters. This includes the shoes, pants, shirt, hairstyle, and the
color of the outfit. 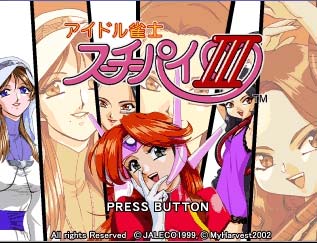 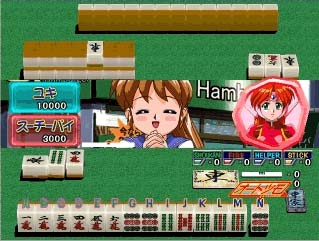